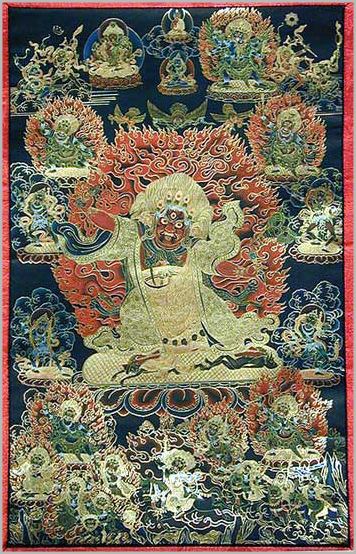 The imagery of wrathful protector deities in the Tantric or Vajrayana Buddhist pantheon can be mystifying to the untutored eye. Bulging eyes, flaming hair, bared fangs, impaled flesh, trampled humans, flayed animal skins, garlands of severed heads, skeletons and menacing weaponry all contained in a single image can seem eccentric.

In appearance, these demonic figures look murderous and prideful, and in fact they are, as they wear their spoils from subjugated beings as ornaments. The Vajrayana tradition, or tantric Buddhist path in Tibet, is often described as treacherous and unforgiving, and wrathful imagery is meant to serve as a guide for the practitioner to work with arising obstacles, often which are associated with the fixation on one’s own ego.

While the origins of these images come from India from the model of rakshasa [male] or rakshasi [female] demon as described in Indian literature, their representations took on particular roles including protection, wisdom, power, wealth and purification within the various lineages of tantric Buddhism throughout Tibet. They serve as a counter-balance to the more benevolent classes of deities, though both, albeit through different methods, are meant to guide the practitioner through the adversities on the path to ultimate Enlightenment.